It might be another no-go for Australia but when our American colleagues generously offered up the madcap Jeep Wrangler Rubicon 392 as the company car in Los Angeles for a week, we would have rowed across the Pacific to get it.

The concept alone is the clearly the work of madmen: jam a 6.4-litre Hemi V8 from the muscled-up Dodge Challenger R/T Scat Pack into Jeep’s most focused off-road weapon. It has enough all-wheel grunt on tap to climb El Capitan and is loud enough, due to its new active exhaust, to wake entire neighbourhoods.

It seemed too good to be true, but there it was, proudly displayed in its Hydro Blue Pearl hero paint job just a stone’s throw away from our arrivals hall at LAX.

It’s an imposing-looking machine even at idle and one that proved quite a challenge to get into, at least for my shorter-than-average frame. It’s a combination of those high-walled 33-inch off-road tyres and the fact it rides a good two inches higher than the regular Rubicon.

On top of that there’s a bonnet scoop you can’t miss and bronze-coloured tow hooks at both ends, clearly setting it apart from any other car in the Wrangler stable. No question, it’s a proper head turner even in this car-crazy town.

It’s not the first time I’ve driven a V8 Jeep Wrangler, but I’ve got to go back to 1981 for my last, in Birmingham, Alabama, where friends of mine liked to get their brown a CJ-7 Renegade properly dirty on weekends (as you do in those parts).

The noise that thing made as we scurried up some mud-laden slopes was bliss. Somehow the head honchos at Jeep at the time had approved the AMC 5.0-litre V8 under the bonnet, and even though it only dished out 93kW of power and 296Nm of peak torque, it was significantly more than the inline-six could muster (73kW and 261Nm) at the time.

It’s hard to believe that was 41 years ago. Thank god for the hardcore enthusiasts that still exist at Jeep, who saw fit to create the most powerful and capable (on and off-road) Wrangler ever.

In case it hasn’t yet clicked, those 392 badges on each side of the air-scoop refer to the naturally-aspirated 392 cubic-inches of V8 muscle lurking under the bonnet scoop, which is entirely functional as you might appreciate given the heat this thing develops under load.

It’s not all about the motor either, there’s additional hardware mods underbody to help with on-road dynamics as well. These include the upgraded frame rails, unique suspension geometry, heavy-duty brakes and high-performance Fox shocks to keep the Wrangler’s body in check during high-speed cornering.

Oh, and this Wrangler uses full-time all-wheel drive with no ability to switch into two-wheel drive like regular Rubicons.

It might be fast and it might be loud but the Wrangler 392 loses none of the stock Rubicon’s mud-slinging and rock-hopping capability. In fact it’s better again, thanks to 262mm of ground clearance (10mm up on a Rubicon Unlimited), greater approach and departure angles, suspension articulation, manoeuvrability, and an 825.5mm wade ability.

If you’re getting low on fuel and you back off on the throttle, the Wrangler Rubicon 392 will automatically shut down four cylinders for maximum fuel economy. Trust me, it works.

How much does the Jeep Wrangler Rubicon 392 cost?

Diehard Wrangler fans will lament the fact Jeep isn’t building any factory right-hand drive versions of its potent 392, which means you’ve got Buckley’s chance of ever getting one on the road in Australia unless you want to organise your own right-hand drive conversion after you land one.

Our tester was also fitted with the following options:

Including American destination charges of $1595, the total price of our tester was US$83,695 before on-road costs.

What is the Jeep Wrangler Rubicon 392 like on the inside?

It’s a Wrangler Rubicon, so don’t expect wall-to-wall Nappa leather or cutting-edge screens as you might find in a G-Wagen or new Defender. This is arguably the most capable production series off-roader on the planet, so luxury trim is suitably scant.

However, you do get some bespoke inclusions with the 392, including leather-trimmed seats with extra bolstering, and Bronze stitching and embroidery to match the exterior elements.

For the first time, there’s a leather-wrapped steering wheel with metal paddle shifters and bronze stitching, which feels good to the touch. There’s more stitched leather for both the shifter gaiters and the dash top.

Apart from these few items, its standard Wrangler Rubicon fare inside the 392, meaning plenty of robust hard plastics, and oversize door and grab handles that make life easy for shorter folks (like this driver) to climb in given its extra ride height.

The 8.4-inch touchscreen works well with quick enough response, as does the wired Apple CarPlay. I didn’t expect much more to be honest, so there’s no hard feelings from where I sit.

The same goes for the instrumentation. Both the speedo and tachometer are traditional dials, but there’s a customisable TFT screen in the centre that I mostly set up as a digital speed readout. Oh, and there’s LED lighting inside.

Storage is only ample up front. There’s a small console bin and cup holders which can swallow the usual cache of keys, sunnies, wallet (if you still carry one), and phone.

Luggage space is suitably spacious, with up to 548 litres available behind the rear seats – enough for our four suitcases.

Under the hood is a 6.4-litre naturally-aspirated V8 SRT Hemi with cylinder deactivation from the Dodge Challenger R/T Scat Pack, paired with an eight-speed automatic transmission.

It dispatches the quarter mile in a claimed 12.9 seconds using constant all-wheel drive.

Top speed is a governed 180km/h, thanks to the on-road limitations of the 392’s aggressive off-road BF Goodrich tyres.

Never mind the aesthetic value of the bonnet scoop, its primary purpose is to feed the motor with cooler, denser, outside air for maximum performance.

Moreover, the 392 is able to access fresh air regardless of the conditions thanks to its proprietary Hydro-Guide air intake system that uses a tri-level ducting structure with a series of drains that can disperse water.

It even works if the air scoop becomes blocked with snow, ice, mud or debris by using a secondary air path within the hood structure to feed the engine, thus allowing maximum performance off-road.

Fuel consumption is rated at 16.8L/100km on the combined cycle, and while we achieved that or better on some days, mostly we were averaging around 23L/100km and enjoying every minute of it.

How does the Jeep Wrangler Rubicon 392 drive?

This is the first vehicle I’ve ever driven that I’d rather start remotely (every time) just to hear the ear-splitting bark it emits before settling down to a similarly-intoxicating Hemi burble. I couldn’t get enough.

After startup, you’ll need to hit the button with exhaust pipes on it if you want to assault the eardrums of the public, or just to be downright offensive in the more exclusive, quieter neighbourhoods.

Apologies to those folks we might have rattled on that Sunday morning in their G-Wagens – we just drowned them out with the 6.4-litre Hemi.

Never mind the full-throttle freeway merges in LA. You just punch it from anywhere in the rev range and the quick-shifting eight-speed auto kicks down seamlessly and boom, it feels (and sounds) like you’re going full speed in a full-blown NASCAR, such is the racket from those quad-tipped pipes.

Throttle response is extra sharp, especially off the mark. It might be a Jeep Wrangler at its core, but there’s not much that can trump the 392 out of the blocks, even in Los Angeles. It’s an absolute hoot.

Blasting down the 405 from Montebello to Orange County and then onto Encinitas several times over the week proved a breeze, at pace. Never mind the long fast sweepers either. This Jeep feels planted under load to the point where you tend to squeeze on more power.

It’s remarkable given the 392’s extra ride height and knobbly tyres, but they just seem to grip up and dig in to the tarmac providing an uncanny level of high-speed confidence in this undisputed off-road superhero.

Problem is, there’s not quite enough bolstering in the seats to cope with the cornering loads this thing is capable of. Just a bit more would make all the difference.

The improved handling is likely the result of beefed up frame rails, front upper control arms and cast iron steering knuckles designed to help keep the monster-powered Jeep in check under high loads. It works.

By all means use the paddle shifters, especially under heavy braking on the street, but Jeep’s TorqueFlight transmission is fully electronic and features on-the-fly shift-map changing, which very quickly sorts out your driving style and adapts with rapid auto-blipping under braking.

The Wrangler Rubicon 392 is also equipped with heavy-duty stoppers, so bringing this 2385kg beast to a halt is another thing you don’t need to fret about.

No doubt the 35-inch deep-walled tyres and Fox dampers make a significant impact on the 392’s ability to absorb bumps and iron out broken roads. However, to dial in decent body control at the same time on a body-on-frame, off-road 4×4 with a rigid axle on the tarmac, is quite a feat.

Anyone who’s ever taken a Wrangler Rubicon up the Rubicon Trail will know this thing is capable of seriously mind-blowing exploits too extreme to be thought possible for a recreational vehicle straight out of the box.

We were keen exploit the 392’s significant off-road arsenal with some hill-climbing out of LA, around Acton, but as suspected it was all too easy and what was a reasonable ascent required nothing more than a point-and-shoot approach in the default AWD-high mode. It did sound great scaling that hill.

What do you get?

There are ten exterior colours available with the Wrangler Rubicon 392:

Is the Jeep Wrangler Rubicon 392 safe?

The JL Series Jeep Wrangler has a three-star safety rating from ANCAP after specific upgrades were made in late 2019 on the back of its initial one-star rating.

Those upgrades include the inclusion of autonomous emergency braking and blind-spot monitoring as standard features.

It’s also gets dual front, and combination side airbags that protect both chest and head for driver and front passenger. Head-protecting side airbags aren’t available for rear passengers.

In Australia, the 2022 Jeep Wrangler comes standard with the following safety features:

How much does the Jeep Wrangler Rubicon 392 cost to run?

In Australia, the Jeep range is backed by a five-year, 100,000km warranty.

It wouldn’t matter if Jeep Australia was charging $120,000 a pop for a factory right-hand drive Wrangler Rubicon 392, my guess is it couldn’t get enough to meet local demand when you consider what Land Rover is charging for the Defender 110 V8 equivalent. Never mind the stratospherically-priced AMG G63.

The fact is, I’ve never had more fun driving a hardcore 4×4 on the tarmac. The combination of its hot-hatch crushing pace out of the blocks, high-speed composure on the freeway, irresistible (and offensive) exhaust note at the push of a button, and its undisputed hero status off the beaten track makes it a winner.

If that’s not enough, it’s a perfectly practical utility vehicle for the beach, especially if you’ve got the one-touch powered roof.

Finally, how good does it look in Hydro Blue Pearl? 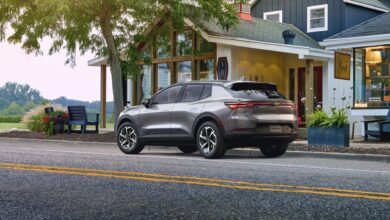 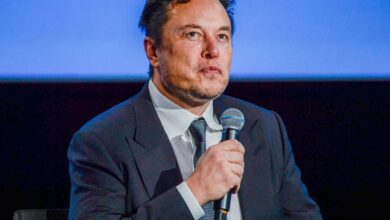 Tesla stock ends its worst year ever with a 65% loss in 2022, wiping out more than $700 billion in market capitalization 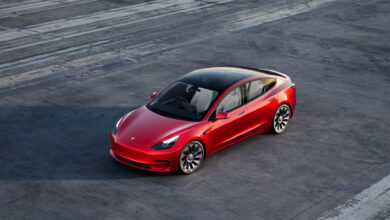 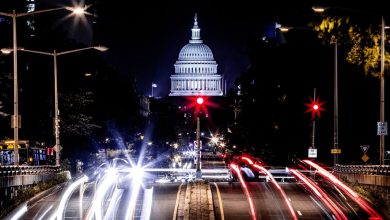