It may not look like much, but this hazy orange and black image of the supermassive black hole at the center of our Milky Way has been imaged for the first time.

Although the black hole itself, known as Sagittarius A*, is completely dark, it is surrounded by a ring of bright bright gas distorted by its own gravity. It was captured by the Event Horizon Telescope Collaboration, together The global team took the famous first picture of a black hole inside the galaxy Messier 87 (M87) in 2019. Read full story.

—Dmitri, a Russian soldier, explains why he refused to rejoin the invasion of Ukraine when he returned to Russian soil to Guardians.

I’ve scoured the internet to find you today’s most interesting/important/scary/fascinating stories about tech.

1 Elon Musk has put his Twitter deal “on hold”
He said he’s waiting for details to support the calculation that spam and fake accounts represent less than 5% of users. (WP $)
+ The news comes after the company fired two of its top executives. (NYT $)
+ For celebrities, Twitter is high risk and low reward. (WP $)
+ Musk is pitting US Tesla workers against their counterparts in China. (Guardians)

2 Six people have now died in North Korea amid its first outbreak
More than 187,800 people are being isolated and treated for the virus. (Guardians)
+ Africa’s first covid vaccine factory has yet to receive any orders. (NYT $)

4 Crypto Detectives Are In High Demand
Investigators are being hired to track down stolen bitcoin and NFTs. (Vox)
+ How the current crypto crash mirrors the 2008 financial crisis. (Foreign Policy)
+ NFT sales are also plummeting. (WSJ $)

6 The FBI Bought Pegasus Spyware to Help with Investigations
Earlier, the Bureau said it purchased the hacking tool to test and evaluate it. (NYT $)
+ Google doesn’t enforce its own ban on ads for tracking software. (CHILDREN)

7 Ways Japan lost its place as a global technology start-up
Now it is trying to swipe it back. (The rest of the world)

8 Thousands of popular websites are tracking your import
Keylogger collects keystrokes before you hit ‘submit’ on a form. (Wired $)
+ Yik Yak, the anonymous social media platform, has revealed the location of users. (Motherboard)

9 Our understanding of women is still ambiguous
Mainly because they are not a unified group with defined and shared goals. (Atlantic $)

10 Primitive bots of the 2000s that paved the way for Alexa
And they’re a lot happier, too. (Ecstatic)

+ Wrinkled the duck that ran the Long Island marathon (well, its a kilometer) and did rewarded with his own little medal.
+ By Danny Boyle Upcoming TV series about Sex Pistols sounds fun.
+ Barry Webb’s photo of mold organism absolutely fascinating — they look like alien plants.
+ After yesterday’s giant sturgeon, a The giant stingray is in danger of extinction was brought back to the Mekong River in Cambodia safely.
+ “BookTok” is It is undeniable that more and more young people are reading books.
+ Friday the 13th! This is why it an unlucky day in some cultures.
+ I’m really not sure about this ice cream flavor. 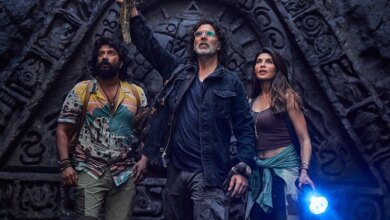